So what is all the buzz around Matcha tea about? Why is it heralded as one of the world’s most potent superfoods and is hot news in nutrition and natural therapy.

Matcha tea is packed full of anti-oxidants called polyphenols and catechins which are not found in other nutritious fruits, vegetables and foods. Tea Catechins are some of the most researched and scientifically analysed. Results regularly show that Matcha contains a much higher level of antioxidants on a per gram basis than anything else studied so far

Orac (Oxygen Radical Absorption Capacity) testing developed by the USDA and Tufts University showed that Matcha tea has almost 5 times the amount of antioxidant activity. Antioxidants support your body’s defences and help your body to fight aging, so in this case- more is better! Antioxidants help address the free radicals we are exposed to from pollution, chemicals, radiation, UV and Blue Light pollution which all contribute to cell damage and DNA changes. Matcha tea contains lots (over 60%) of the catechin known as EGCg (epiallocatechin gallate). 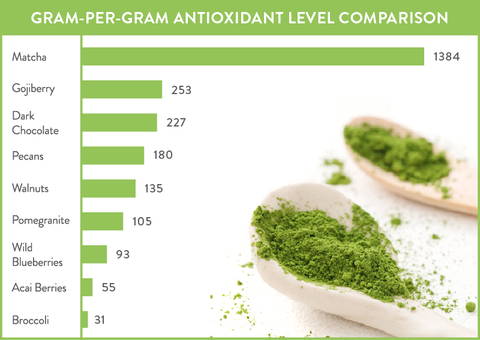 EGCg’s have been shown to support healthy human metabolic rate especially if you already include exercise into your regular routine. Matcha Green tea is high in EGC’s. In 1999 the American Journal of Clinical Nutrition reported that Green Tea supports healthy thermogenesis (how your body burns calories). In addition Matcha tea with its combination of caffeine, green tea catechins and L-theanine could also help manage carbohydrate and sugar cravings.

Matcha tea has 5 times more L-Theanine than normal green tea. L-Theanine is an amino acid that supports calming alpha wave activity in the human brain. Alpha waves can help balance the feelings of stress and help you relax (think of all those meditating Buddhist monks). Regular drinkers of Matcha report it doesn’t provide the jitters that Coffee and other caffeine drinks usually cause – and it doesn’t cause the headaches or energy crashes associated with coffee if you haven’t drunk your usual morning fix. L-Theanine also helps to produce dopamine and serotonin which are two chemicals your body requires to support mood, mental clarity and focus and regular sleep patterns. Although, if you are sensitive to caffeine be careful not to drink your Matcha in the afternoon as it can keep you alert longer than you would necessarily prefer when you should be sleeping!

Matcha tea bushes grow in the shady valleys of Japan, and during the last three weeks before they are harvested the bushes are completely covered to deprive them of sun. This is why Matcha has such a dark green colour and is richer in chlorophyll than other teas. Chlorophyll is well known for its ability to support the body to detox itself- especially from heavy metal, chemicals and hormone disrupters.

The Japanese Samurai warriors always drank Matcha tea before battles for its natural energy kick. This doesn’t just come from the caffeine- but also from the combination of other nutrients. Japanese people also live to some of the oldest ages on earth. In particular the Okinawa area of Japan has more centurions than any other place in the world and this is partly attributed to their regular daily consumption of Matcha Green Tea. It is thought that the antioxidants in Matcha tea may help fight off oxidation of the cells, which in turn may help to slow the aging of the skin.

Cholesterol and the Heart

So with all this amazing Matcha magic to digest, it is important to take on board a word of caution. As you are ingesting the entire leaf, some varieties of Matcha can be high in lead or other nasty chemicals. Look for organic varieties and ask to make sure the manufacturer has had the tea tested to ensure toxic metals and radiation levels are safe before you pop on the kettle.

Always read the label and use as directed. If symptoms persist see your healthcare professional. BioBalance, Collingwood.